Shah Alam, 09 R. Akhir = 25 March (Thursday):
Seven members of States Parliament (like ADUN in Malaysia) of German visit Speaker State Assembly of Selangor this afternoon. About ten ADUNs and members of MPPJ came to accompany Speaker welcome the delegates. They have arrived around three. After a short brief and press conference the delegates were drove to Concord Hotel for launch and an hour later returned to Annex for presentation and discussion. 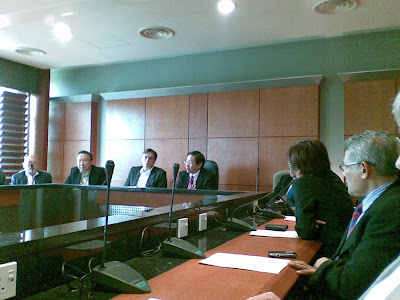 Before the presentation of papers Speaker YB Teng Chang Khim introduced members of State Assembly and Members of MPPJ followed by Dr. Wilhelm Holmeister Head of the delegates and Asia Political Dialog of Conrad Adenauer Stiftung introduced his delegates that they are Dr Thomas Knirsch from Conrad Adenauer Knirrsch. The other delegates as Members of States Parliament (Niedersachen) of German are Mr David James Mc Allister, Mr Dirk Toepffer, Swantje Hartman, Alice Feedler and Ng Chen Chen as Project Coordinator. 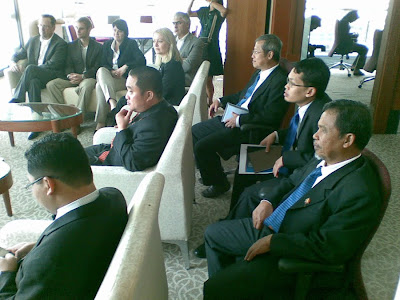 The first paper in the session of presentation was delivered by YB Lau Weng San ADUN Kampong Tunku. He spoke about Selangor State Assembly and followed by YB Nik Nazmi bin Ahmad ADUN Seri Setia. The topic of his paper is about Malaysia`s Electoral System & Election Management. The last and important to know is the paper presented by Dr Thomas Knirsch about Electoral System and Parties In Germany – Introduction.

The significant points that paper raised:

Among the famous parties in German are Christian Democrat Party, Social Democrat Party, Liberal Democrat, Green Party and Communist Party.
There are 16 states Legislature in Germany.
Election for all parliaments in Germany are general, direct, free, equal and secret.
Any German who is 18 years of age or older, has been residing in Germany for at least three months and has not been disfranchised is entitled to vote.
Anyone who has possessed German Nationality for at least one year is eligible to stand for election if he or she has attained the age of 18 by the day on which the election is held.
The candidates are nominated by their parties, however, individual with no party affiliation may also run for office.
Elections for the German Bundestag are based on a system of `personalized` proportional representation.
Voter has two votes, the first of which is given to a candidate in their constituency. The successful candidate is elected on a first-past-post basis. The second vote is given to a list of candidates put up by the parties.
Only parties gaining at least five percent of the valid second votes or at least three constituency seats can be represanted in parliament..
Local government elections sometimes produce results that differ greatly from those of federal and state election. Here the `townhall parties`, independent voters` associations, often play an important role.

Today there are five parties represented in the Bundestag, Christian Democratic Union/Christian Social Union of Bavaria (239 Seats), Social Democratic Party (146), Free Democratic Party (94), The Left (76) and Alliance 90/The Green (68).
The parties receive funds from the state each year and parties are eligible to claim those funds when they reach certain results, which differ between the first and the second vote. 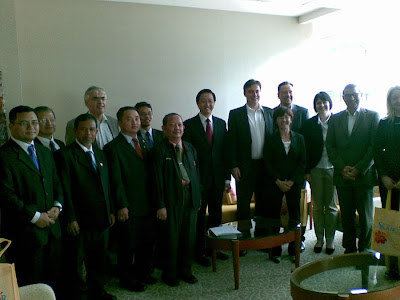 The significant points that German practices the proportionate votes and normally one party cannot dominate the others, the age of voter is 18 years old. The voter has two votes, one for candidate and the other for party and the party receives fund from state and there are elections for local government. Malaysia could learn the democratic practiced in Germany and could practice in our country.
ditulis oleh Dr Shafie Abu Bakar at 7:52 AM
Email ThisBlogThis!Share to TwitterShare to FacebookShare to Pinterest