A Visit of A Professor From Japan

Office of ADUN, 6 Muharram = 23 December (Wednesday):
He comes exactly at 4.00 p.m. as appointed and I pleased him into my room. He brings with him a bundle of photo-copies that when I asked he said, "That photo-copies about YB, I photo-copied from YB blog". That means he studied about me before he comes to interview me.
He is Dr Soda Naoki, Associate Professor from Graduate School of Global Studies, Faculty of Foreign Studies, Tokyo University of Foreign Studies, 3-11-1, Asahi-cho, Fuchu-shi, Tokyo 183-8534, Japan. 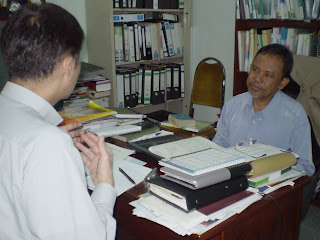 A week before Dr. Soda Naoki has sent me an e-mail to make an appointment to interview me during his visit to Malaysia from 20 – 29 December 2009, that I agreed to meet him today. After sitting in my office he draws a clip papers of an article and shows to me about paper research that he wrote. The paper written in Japanese , but the title only translated in English, "The Muslim Community in a New Town. A Note on a suburban Religious Network in Malaysia" in Journal of Southeast Asian Studies, Tokyo University of Foreign Studies That paper refers to last interview that he ever came to interview me at my office before the 2004 election. According to him he also came to interview me before the 2008 election. According to Prof. Soda Naoki he also did research about the History of Modern Malaysia at FSKK, UKM from 1996 – 1999. Dr. Soda Naoki could master Malay language and speak fluently. 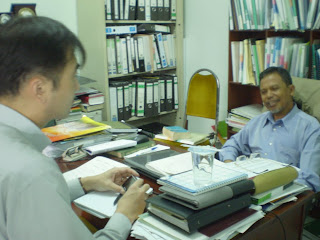 As he is interested in history, politic, social and community, especially in new town, his focus interview about my carrier in politic, the support of people in my constituency, the relationship with other parties in 'Pakatan Rakyat' and with Umno-BN. He also emphasized about the communities in Bandar Baru Bangi, the function of mosques and suraus that we considered very important institutions in Malay-Muslim community. The interview lasted about an hour. 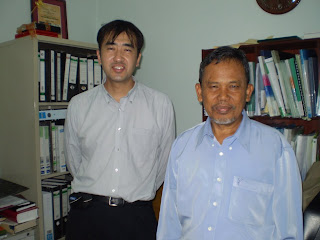 ditulis oleh Dr Shafie Abu Bakar at 7:40 AM
Email ThisBlogThis!Share to TwitterShare to FacebookShare to Pinterest