No doubt, Kelantan is the strongest fort for Pas. For twenty years that state under Pas and remained unchallenged by Umno-BN. In fact following Kelantan Pas has spread his wing to Kedah, Selangor and the other states. What is the secret that Kelantan being remained under Pas. The answer is the strong of Islamic leadership (ulama`) that leads by YAB Tuan Guru Dato` Nik Abdul Aziz bin Nik Mat who is the Menteri Besar of Kelantan and Murshidul Am of Pas and of cause the supporting of the people to Islam and the leadership.. 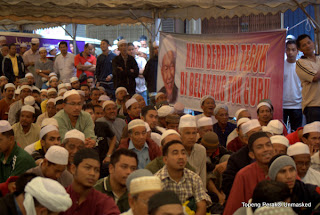 Caught in the situation and Kelantan agitated and demanded the royalty and Tengku Razaleigh agreed to participate in the caucus of the royalty the Federal Government really under pressure and uncertainty to accept or not to accept. To accept that means Federal Government (Petronas) needed to pay Kelantan one billion Malaysian dollar yearly and arrears of the past, it means not only exhausted the Federal money, but, what the Federal strongly object not give the royalty to Kelantan that by giving the royalty Kelantan would become a rich country, it likes give gun to enemy. Pas and Kelantan would not only popular but stronger. 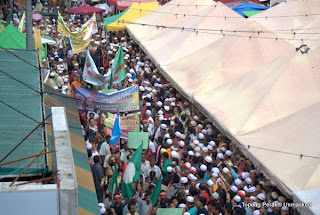 For Umno-BN the best way is to weaken the Pas and leaders by any relevant issue, that the approach taken by Umno-BN such as question the motive of company or person who offer Tuan Guru sponsorship to Makkah and asked Malaysian Anti-Corruption Agency to investigate that embarrassed Tuan Guru and cancelled his visit to Makkah. Not satisfied with the case of sponsorship they raised the case of Tuan Guru son in Law Abdul Ariffahmi Abdul Rahman who is Chief Executive Officer of Perbadanan Menteri Besar Kelantan. Abdul Ariffahmi`s office was raided by the Malaysian Anti-Corruption Agency early November to investigate alleged financial anomalies and irregularities that brought him to tender his resignation on December 24 and will be effected on next Much 23. Not satisfied what they have done UMNO-BN raised the unnecessary question about who would succeed YAB Tuan Guru Dato` Nik Abdul Aziz.

Three names were mentioned to fill the post. However all agreed that the already Deputy Menteri Besar YB Mohammad Yaakob is the man who is eligible to fill, if there is vacancy and agreed by President and members . However all the issues that Umno-BN tried to blow, but never ignited until they found the new one what they called sermon of Tok Guru to downfall Prime Minister Dato` Seri Najib because the Prime Minister did not agree to give oil royalty to Kelantan. They played the issue through the media tv and papers in hopping that the people especially from Kelantan will against Tuan Guru and for the testing ground they gathered around 1000 on Tuesday first December at Kota Baru and demonstrated, protested and and asked Tuan Guru to quite.

However on Friday the 4th December they were ten thousand of people gathered to demonstrate and gave full support the leadership of Tuk Guru. That counter attacked silenced for a while the enemy and made Pas stronger. 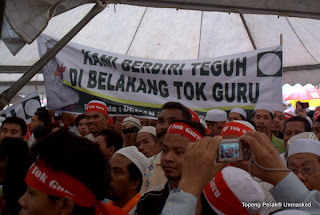 However they would not stop to agitate Pas and its leaders as a core of Pakatan. They would not sleep in search the weakness of Pas and its leaders and ready to attack at any time. Kelantan must counter them aggressively and asked the royalty as a pressure to them.
ditulis oleh Dr Shafie Abu Bakar at 6:52 AM
Email ThisBlogThis!Share to TwitterShare to FacebookShare to Pinterest